CLAY: We begin with the tally from the defund-the-police argument, which I believe is the single dumbest political argument that has existed in my lifetime because we knew exactly what the cost was going to be, and still Democrats embraced it. I want to let you hear this data here, and then we’re gonna play you a montage of Democrats saying, “Hey, when we say, ‘defund the police,’ we mean it.”

That’s the largest we have ever seen and over double the largest one-year rise we’ve ever seen before, which was a 12.7% increase in 1968. The data scheduled to be officially released in the near future here. But as we walk through all of this, I want to play for you Democrats arguing, “When we say, ‘defund the police,’ we mean defund them.” Now that we know the full tally of deaths that this argument has entailed.

VOICE: I am for defunding the police.

LIGHTFOOT: “Defund the police” does not mean abolish the police. It means a dramatic reduction in the number of police in our poor communities. Police are terrorizing black and brown communities! Evidence is clear across the country.

BUCK: The idiotic theories of the left, Clay, come with consequences for people. And, tragically — and at some level ironically — the voices that you’re hearing here that are advocating for defunding, which they seem to mostly understand is the actual removal of funding for police.

But then sometimes it means having more social workers or whatever it may be, resulted in — as you pointed out, data that shows unequivocally — a biggest-in-60-years leap in the murder rate in this country which “disproportionately affects black and brown communities” in major cities, as we know.

So that moment of national panic that was kicked off, as we know, because of the incident with George Floyd where a police officer — who has been found guilty of murder and, as we know, and is looking likely to spend decades in prison. That then resulted in riots all across the country.

It resulted in politicians — including some Republicans, I might note — who all of a sudden were willing to throw police under the business for the actions of really one police officer. The end result was that a lot of people are dead who would not have been dead based on statistics otherwise. Not just a stupid idea. “Defund the police” is not just a dumb idea.

It was a lethal idea, a murderous idea in the sense that it left people to the whims of the criminals in their societies, in their communities, and law enforcement was abandoned, politically and, in in some cases financially. There was actual defunding, we should remind everybody. Austin, a hundred million dollars. New York pulled a billion dollars out of the NYPD budget.

BUCK: Minneapolis pulled money out of the budget. They actually did do this, and there have been increases in the major cities in particular in law enforcement retiring and just morale being very, very low. Clay, you defund police; you get more crime. You don’t let Border Patrol do their job, you get more illegal immigration. These are simple cause-and-effect situations, and we see the consequences of them. It’s disastrous for the country and for the Biden administration.

CLAY: I think if you look at that data, again, a 29% increase in overall murders, the biggest ever — over double the biggest ever — increase since the FBI started tracking this data back in 1960, there are thousands of people who are dead right now, Buck, that would otherwise have been alive if police had been able to do their job.

There’s gonna be a backpedaling from this. There’s gonna be an attempt to pretend this was not real. We’ve already seen it begin. Can’t allow it to happen. You need to hold politicians to the consequences of their words with these actions. And also we’re going to see, I believe, a swing back in the other direction. And we’re already starting to see it.

And we got tons of police officers who listen to us all over the country, and we don’t need you to tell us, but we’ve taken these calls to verify it. They’ve never been more disrespected in their entire career of law enforcement, and when you pull back… We knew! This is so frustrating about this. We knew the Ferguson Effect was real, and effectively what we did was put the Ferguson Effect in play in every place in the country in terms of police being able to do their job.

BUCK: We knew it was real because this wasn’t the first iteration of Black Lives Matter as a movement. BLM, as we all recall, started after Ferguson, Missouri, with Michael Brown during the Obama administration. There was that timeless moment where you had a CNN reporter standing in front of a conflagration — a building fully on fire — saying, “This was a mostly peaceful protest.”

I think we will never forget that image, because it was the most CNN moment I think I’ve ever seen in my life: Narrative over the blazing inferno in front of your very eyes. But, Clay, the same thing happened. That’s how Heather Mac Donald — and credit to her for coming up with the notion of or doing the research to prove the Ferguson Effect after the first time around.

It’s quite clear. When you tell cops, “Hey, if there’s an incident that’s caught on video where it looks like you’re being rough — maybe it doesn’t show what happened even leading up to that moment, maybe it’s an edited video — we will not have your back as a district attorney. We will not politically support law enforcement doing what it has to do to keep communities safe from criminals.”

When you do that, all the sudden that guy who is running away with a handbag down the alleyway, the cop says, “I’m not gonna chase him. What if I have to tackle him? What if it gets ugly? I’m gonna risk my pension? I’m gonna risk my freedom?” So cops say, “Fine. Unless we really have to step in, we’re not going to step in.”

And then you take San Francisco, where people take armloads of stolen goods in broad daylight walking out, and no one does anything. Then you have what we’ve had here in New York City, Clay, where people were shooting up heroin in broad daylight on Broadway, which I saw myself in 2020, I would note. And I think also all the stats have to be put in the context of 2020 was the year of the lockdown. There are months, there were months where there should have been far fewer murders and homicides.

BUCK: And there were actually for a while. There was a big drop-off. But the summer… This is what’s so important, because they want to say, “Oh, it was the pandemic.”

CLAY: Yeah, caused by the pandemic.

BUCK: They want to say that. But actually, the spike in homicides got going in June of 2020! What was the inciting incident? What was the difference all of a sudden in June? The rises of the BLM movement. The virus was actually in recession in June. Things were opening up. We all remember that. So don’t let them get away with more lies.

I just would hope there’s accountability. I do think, Clay, with the 43% Biden support right now we see — which is really awful for a first-year presidency — the crime aspect of it… People have seen Democrats… Look, they’re just reckless on this issue. They will feed cops to the wolves to apiece the mob and the communities suffer as a result.

CLAY: And you’re right about what we’re going to see as this data gets more widely discussed — and I think people need to be prepared to push back against it — is we had a skyrocketing crime rate that really only happened in about six months of the year. Because due to the shutdowns in March and April and May, the first five months or so of the year the murder rate was not in any way poised to be up by historic margins.

In fact, it was right around average and then it took off with the BLM movement with the George Floyd. And, by the way, I think this ties in as well with the fundamental lie that is being told here where we got some videos that came out from inside of the Capitol on January 6th that they have been fighting to avoid the release of.

You talked about the “mostly peaceful protests” with the fires going in the background and how much of a direct lie that was by CNN. The idea that we saw months of rioting, looting, violence all over America connected to BLM protests against police, and there was virtually no condemnation of it whatsoever.

And then the one time, the one time when conservatives actually rioted — and, by the way, they deserve to be punished for it like everybody who was rioting for months all throughout this country. But the difference between the way the media has covered it… We got one person shot in January 6th. Meanwhile, we got a 29% increase, the largest on record in reported history by the FBI, and there was virtually no condemnation at all.

CLAY: In fact, we were told it was mostly peaceful. Ashli Babbitt was killed.

BUCK: A protester, unarmed protester, not somebody who was in law enforcement, as we know. And I still… I’ve talked to so many people about that use-of-force incident. I still think that basically the double standard is at play where because it’s a Trump supporter, they act like shooting a woman in the neck from 15 or 20 feet away when she’s at a door… 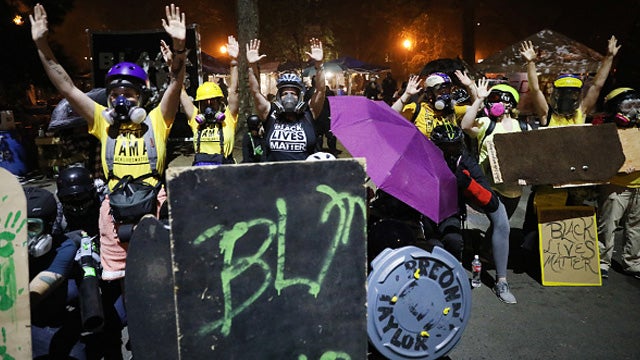 Anyway, I still think that that was excessive force, but I’ve written about excessive force in other incidents that people barely even know about in places where there are times when cops actually step out of line. But the BLM narrative is very specific what the facts of the case must be for everyone to get upset about it.

BUCK: There was a riot, but it was mostly peaceful.

This story originally appeared in Clay Travis and Buck Sexton

About The Clay Travis and Buck Sexton Show